3 Options for When You Get Told No

Asking for what you want more often will get you more rejections. To use an extreme example, if you ask for a raise every quarter, you’re doing to get told no. Even if you ask yearly you may get told no. 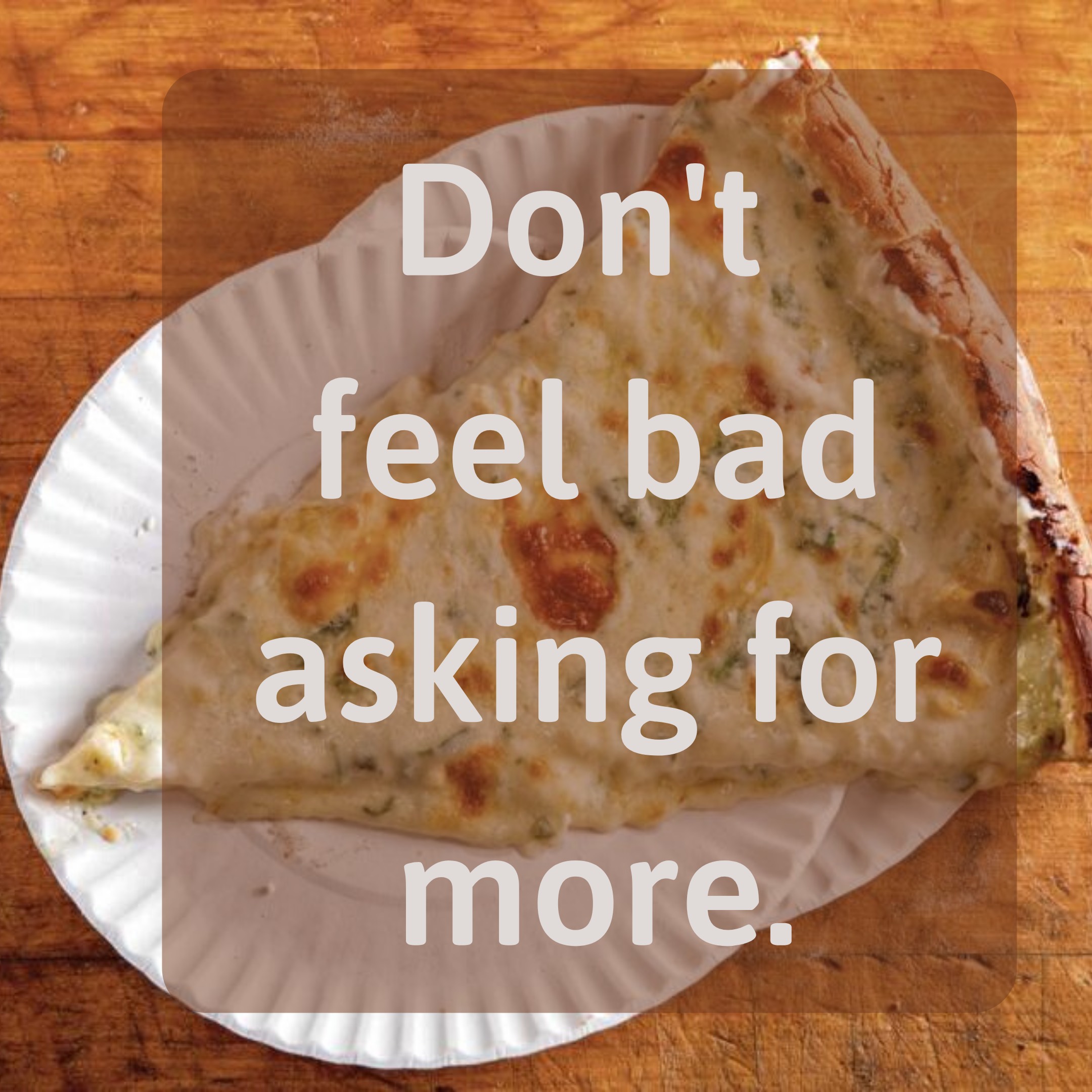 When you get told no, it’s important to remember that you are not entitled to anything and you must show that the value you added is worth whatever you are asking for. Sometimes, the answer will still be no.

Maybe your boss doesn’t think you deserve a raise. Maybe your boss’s boss thinks you don’t deserve one. Maybe everyone agrees you deserve one but there isn’t any budget. Maybe nobody has even thought about the topic of a raise until you brought it up, but they are too lazy to go through the process of getting a raise approved. All of these reasons can result in you getting a no (or a no for now, as you should think of it). The next step is, how can you turn that no into a yes down the line?

When you hear no, try picking one of three methods as an action item so that you can achieve your ultimate goal and turn that no into a yes. You will have to gauge the situation in order to determine which method is most appropriate. As with most things in life, timing is everything here. The play you choose is completely reliant on the timing of the situation.

Method #1: Put it on the schedule

Method one is very transparent and goal oriented. When you hear no, you accept it, but you portray the importance of the topic for you and ask to schedule another time to discuss it at a later point in time. This is a good time to ask what you need to do in order to get a yes. You’ll take this information and incorporate it into your routine so that you can achieve the milestones you need to hit to get the yes. You will want to schedule a follow up progress meeting to clearly point to the ways that you’ve grown, and ask for what you want again.

You’re playing a long term game with Method 1. The time frame here can be anywhere from weeks to years, depending on what you are asking for. Check in progress and feedback is important here. Bulleted lists and goals will also help keep you and your manager on track and communication lines clear.

This method is essentially making a deal. You are saying I want X. Your manager tells you no, so in turn you ask what you have to do to get X. He or she tells you that you need to do Y and Z. You say that you will work on that, and you’d love to sync up in 3 months to re-evaluate. In that follow up meeting you will point to items Y and Z that you completed, with examples, and ask for X again. If you haven’t been able to accomplish Z, you can share why you haven’t. If you are consistently accomplishing Y and Z but not getting the X you are asking for, it’s time to take your talents elsewhere.

Method #2: Put it in your back pocket

This method is opportunistic and requires a less clear strategy than the previous method. It’s almost sneaky, but it’s smart. After you ask for X and you’re told no, you ask why, and then table it. You can ask a few questions to better understand why the answer was specifically no, similar to Method 1. Over time, you can talk to additional people at the company without necessarily divulging your end goal (if the situation warrants explaining yourself, so be it). You are a collector of information in this role. You are stealthy and curious. Every time you pick up a useful piece of information, you put it in your back pocket.

When an opportunity presents itself, ask for what you want. This can be in a scheduled meeting, but doesn’t have to be. This method works well when the question is delivered in a casual manner. For instance if a company is at a happy hour and you happen to have a moment alone with a decision maker, you can nonchalantly bring up your past conversation. You can discuss a problem you’re aware the team is facing and solution. You can weave your value-add into the conversation, and ask to revisit what you previously asked for. When not in the office, people tend to act in a more relaxed and candid manner. You can capitalize on the extra leeway you get when people socialize outside of work to ask for something bolder, or insert your goal into the conversation. In addition to your extra conversational liberties, you will likely receive a more real answer.

This tactic is very situational and specific, so the way you choose to play the stealthy method leaves the most room for interpretation. The timing is most important in this Method, and the conversation requires more finesse. I recommend equipping yourself with relevant information and ways you can benefit the person you are speaking to before taking on this challenge. If you are up for it, taking your information and initial ask out of your pocket at the right time can benefit you.

Methods 1 and 2 aren’t completely mutually exclusive, so you can combine both depending on the scenario. If you have a meeting scheduled and your bulleted to-do list before the next meeting, you can still bring up your point if an ideal opportunity presents itself.

This method is the most fun option of the three. Again, you’ll have to read the situation to see if you can do this. With the Ask Again method, you literally ask again, right after you already asked. People often give no as an answer if they are following a rule. They are enforcing a policy that they may find silly, or they may not agree with. They want to say yes, but their hands are tied by a rule over their head so the answer is no. Nobody wants to be a rulebreaker.

Despite the desire to “not get in trouble” people also have a hard time abiding by rules they don’t agree with, and thus a small internal conflict pursues. It’s usually apparent when someone has this struggle and they want to tell you yes. They may give a quiet or weak “no.” They may shift awkwardly and seem less confident. Here’s when I usually will directly ask how firm a no their answer is. “Is this written in ink, or is there some grey area here?” If there’s grey area in that moment, you immediately ask again. Once you determine you can go in for the kill, so to speak, you ask again. Asking again immediately solidifies that you are firm in what you want. Your desire in this case is stronger than their inclination to say no, so they concede. This is a power move, a tenacious move. If you think about it, it’s somewhat confrontational, asking again when you were told no moments earlier. It can be awkward, but hey, get your free pizza.

Method three brings you back to childhood. When you ask a parent for something, wait what you’re sure is a lifetime but is actually two minutes, and ask again. Typically the parent gets mad for the repeat question, but every once in a while the child prevails. It’s not quite that juvenile, but internally feels related. Method three works best for asks that are less important. If you are asking for an important raise and you hear no, don’t ask again immediately. Method 3 is not a strategic play the way that Methods 1 and 2 are.

To illuminate the use of this Method, here’s a fun and decidedly unimportant example. I attended a conference in which there were many sponsors on the showroom floor. My company had a booth. At conferences companies give away “swag” that can take the form of logoed pens, tshirts, post-its and many more items. One particular company had set up a game at their booth in which winners were gifted an inexpensive helicopter drone. I wanted to win a drone and walked over to play. The person at the other company saw the company I was from, and proceeded to tell me that he wasn’t allowed to give out the drones to other sponsors, and he could only give them to attendees. The conference wasn’t busy at that time, they had a large stack of drones. The man’s voice also wavered as he spoke, indicating his brain didn’t align with his words. I said “is that no firm, or is there a grey area here?” His immediate response was that there was a grey area, followed by him asking me which drone I wanted. In exchange, I promised not to rat him out for breaking the rules. Like I said, a silly use case, but I got a drone out of it.

If you ask for free pizza and Pat says no, experiment asking for it again, or ask for a different variety of your slice of pizza. Each of these three methods can be put to work in a professional or personal setting, and in a high or low stake environment. Note the patterns that you experience, and put the Methods to the test.